Isha Margry is a Nepal born British actress, fluent in English and Nepali with years of experience under her belt. She has appeared in a Nepali TV series, several British short films and commercials and also a one-woman theatre show. Recent work includes online TV series T.H.O.R with The House of Reggie’s.

She moved to the UK from Nepal in 2007, after learning how to speak, read, and write English, she ran a successful Tour operator business for over 10 years before re-starting her acting career. She can drive, swim and dance and takes regular workshops to keep on top of her skills. When she’s not acting she enjoys travelling, writing and spending time with family. 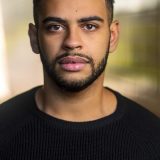